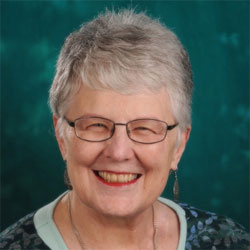 Susan Titus has been a professional Social Worker since her graduation from Wayne State University with a MSW, specializing in Social Group Work, in 1968. She worked with seriously chronically mentally ill adults by establishing a group program in the Detroit Recreation Department, and at Operation Friendship, both “club models” of services for mentally ill persons. She worked at the Girl Scouts of Metropolitan Detroit where she was in charge of the camping programs. She then worked as a legislative and administrative assistant to Detroit Councilwoman Maryann Mahaffey for three years.
In 1977, Titus was appointed Executive Director of Citizens for Better Care (CBC), an agency which advocates for persons receiving long term care services. During the over 20 years of her work, CBC expanded from one office to six offices across Michigan with 30 employees, with a budget of over $1million. In 1998, Titus was appointed as Executive Director of the Michigan Parkinson Foundation, where she expanded the number of volunteer run support groups by 50% and found funding for the agency to offer diagnostic clinics across the state of Michigan.
In 2002, Titus became the part-time interim Executive Director of metropolitan Detroit’s Transportation Riders United, an advocacy group for regional public transportation in Metropolitan Detroit. She also worked as an organizational consultant to the Detroit Area Agency on Aging, which funds services for the elderly in Detroit, Highland Park, Hamtramck and eastern Wayne County. She is an active volunteer with Motor City Greyhound Rescue and on the Finance Committee of the Cooperative where she lives.
Titus currently teaches in the Bachelor’s and Master’s degree programs at Wayne State University School of Social Work, after two years as an assistant to the Dean of the SSW where she was responsible for coordinating and staffing an international symposium on social work with groups.

Titus was active in organizing the Union of Part Time Faculty at Wayne State University, affiliated with the American Federation of Teachers. She currently is president of the union.
Titus has been active in many local and national groups; she is past president of the National Citizens Coalition for Nursing Home Reform, a member of the Board of Directors of the American Civil Liberties Union of Michigan. She was also a member of the Board of the Sojourner Foundation, and its treasurer, and joined the Board of the Hope Community Development Corporation in Detroit. She was a member of the Board of Directors of Citizens for Better Care. She was a founding member of Women Executives, a group dedicated to supporting women who are CEO’s of non-profit organizations in Metropolitan Detroit. Titus has been active on the Aging Services Consortium of Detroit, a group of organizations who provide services to the elderly, and its past chair. She has been honored by the Detroit Area Agency on Aging and the National Citizens Coalition for Nursing Home Reform.
Titus has been a panelist, keynote speaker, and trainer on consumer, health and elderly advocacy issues at national, state and local conferences in thirteen states and Washington, D.C. she was born in California and lived in there, Guam, Florida and Hawai'i until 9th grade. She graduated high school from an American High School in Orleans, France. Titus lives in a cooperative in downtown Detroit with her two rescued greyhounds and two cats.
2003, current Part time faculty, Wayne State University School of Social Work; taught Social Work Practice III, “Introduction to Macro Social Work” Winter Semester of 2003 to 2013 for first year graduate students; Social Work Practice III, “Group Work” for senior BSW students, Fall 2005, 2011. 2012; Social Work Practice IV, “Introduction to Macro Social Work” for senior BSW students, Winter, 2006, 2007,2010, 2011, 2012, 2013, 2014 ; Current Issues in Social Welfare Policy and Social Welfare Policy Analysis for BSW Seniors, Fall 2006, Fall 2007, Fall 2009, Fall 2010, 2011, 2012, 2013; Social Welfare and the Social Work Profession, History, Trends and Basic Concepts, Junior BSW students, Fall 2007, 2008; Field Seminar and Capstone Course for CPSA students, academic years 2007-2008, 2008-2009, 2009 – 2010, 2010-2011, 2011-2012, 2012-2013. Field Instructor for WSU, Madonna College and University of Michigan SSW at the ACLU Michigan, Transportation Riders United, and Hope Community Organization and Development.
2003 - 2005 Dean’s Staff, Wayne State University School of Social Work; Staff for committees including the 26th International Symposium of the Association for the Advancement of Social Work with Groups (AASWG) 2003 – 2004; SSW special events coordinator and newsletter editor.
2003 – 2004 Executive Director (interim, part time), Transportation Riders United, an advocacy group to improve public transportation in Detroit, with an annual budget of $60,000, and over 100 volunteers.
2002 – 2004 Consultant to the Detroit Area Agency on Aging, Research report: Hard Times, Hard Choices.
1998 - 2002 Executive Director, Michigan Parkinson Foundation, a statewide organization dedicated to those who live with Parkinson’s, with an annual budget of $500,000, three employees, and 200 volunteers; increased number of support groups by 50% and found $200,000 in funding for outreach clinics across Michigan.
1977 - 1998 Executive Director, Citizens for Better Care, a statewide organization concerned with the quality of long term care, with an annual budget of over $1,000,000. Successfully expanded the agency from seven employees in two offices to 32 employees in six offices in Michigan with additional grants from United Ways, Area Agencies on Aging, foundations and individual gifts. Instituted a donor fund raising data base and stratified appeals to donors. With Board created endowment funds from bequests and large gifts. Created financial procedures for the main office, branch offices and “chapters.” Organization published many consumer books including the Michigan Long Term Care Companion and the Consumer Guide to Nursing Homes.