UPDATE: Due to the CDC recommendation for social distancing, we have postponed this event and plan to host it at a later date. We appreciate your patience and support during this time and look forward to seeing you at a future School of Social Work event. Additional details on the new event date and time will be forthcoming.

The Wayne State University School of Social Work invites you to Rage, Love and Revolution: We are the leaders we have been waiting for! An event to commemorate the legacy of social worker and social justice champion, Maryann Mahaffey.

This exclusive event will take place on April 15, 2020 from 4 - 7 pm in the Wayne State University Law School, Spencer M. Partrich Auditorium and will feature a community conversation with  Michelle Alexander, JD and Amanda Alexander, JD, PhD. Michelle Alexander is the highly acclaimed civil rights lawyer, advocate, legal scholar and author of The New Jim Crow: Mass Incarceration in the Age of Colorblindness — the bestselling book that helped to transform the national debate on racial and criminal justice in the United States. Amanda Alexander is a racial justice lawyer and the founding Executive Director of the Detroit Justice Center, a non-profit law firm working alongside communities to create economic opportunities, transform the justice system, and promote equitable and just cities. The conversation will be facilitated by Detroit artist and Director of Detroit Future Schools, Nathaniel Mullen.

Gifts from this event will support initiatives that memorialize the impact Mahaffey made in Detroit and at Wayne State,
including a memorial garden and community projects, such as ADA compliant/all-play recreational equipment playground for Detroit children. DONATE here.

This event is free and open to the public, but seating is limited. A reception will follow the community discussion.

Maryann Mahaffey empowered social change in Detroit as a social worker, author, educator, civil rights activist, volunteer and political leader. For nearly 60 years at the local, state, national and international levels, Mahaffey put into action her deep commitment to solving critical social issues. Holding steadfast in her ideals, she supported the most vulnerable of our citizens and advocated for equal rights as Detroit City Council president for 12 years and as a council member for 32 years. To memorialize and honor the impact Mahaffey had on the Detroit, it's residents and the social work profession, the Wayne State University School of Social Work has launched the Maryann Mahaffey Memorial Campaign. 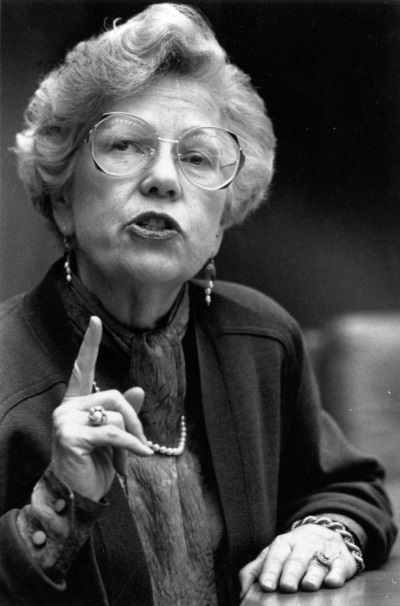 Maryann's youth was rooted in the value of hard work and the importance of education and equality. Born in Burlington Iowa in 1925, Maryann grew up witnessing her wallpaper salesman and gas station operator father work 12-hour days to support his family during the Great Depression. After visiting Little Rock, Arkansas in high school, Maryann came face-to-face with the reality of racism in the South and was encouraged by her civics teacher to explore civil rights advocacy. Maryann was further encouraged by her mother to advocate for equality, including a woman's right to vote and earn an education. After Maryann's mother was not permitted to complete high school, due to her family's fear of women being overeducated, she insisted that her daughter finish school and launch her career prior to marriage. Throughout her career Maryann earned a bachelor's degree from Cornell College, a Master's in Social Work from the University of Southern California and her Doctorate of Humanities from the Detroit International School of Ministries.

Honored in the Michigan Women's Hall of Fame, Maryann became a champion for women's rights, filing the precedent-setting lawsuit, which established a woman's right to run for office using her birth name, leading the fight to open the doors of the Detroit Athletic Club to women, and she enacted an ordinance explaining and prohibiting sexual harassment of city employees.

There was also another legacy Maryann left: the hundreds of students and rising stars that the Councilwoman taught and mentored, including the late City Council Member and President Erma Henderson, the current Dean of the Wayne State University School of Social Work Sheryl Kubiak and members of the WSU Board of Governors. Maryann worked as a faculty member in the Wayne State School of Social Work from 1965 to 1990 and taught classes on a methodology, community work, community planning, policy development and supervised field placements for students in Metro Detroit. Maryann, a proud social worker, was the first woman elected as president to the National Association of Social Workers, co-edited a seminal text (Practical Politics: Social Work and Political Responsibility), was a member of the executive committee of the International Federation of Social Work and initiated the creation of the Detroit Mayor's Task Force on Malnutrition and Hunger, which she also chaired.

To honor and memorialize the impact Maryann made in Detroit and at Wayne State, Wayne State University's School of Social Work is participating in the Maryann Mahaffey Memorial Campaign. Help us ensure that Maryann's memory and impact is honored by making a gift to one of the funds below.