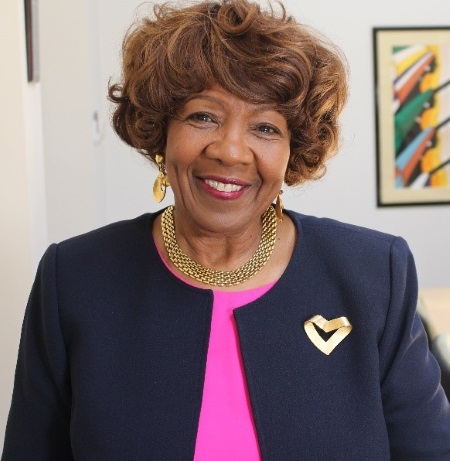 Alice Thompson '80, M.S.W. '81 lives her credo: service to others before self. And her recent gift to Wayne State's School of Social Work, a $25,000 endowed scholarship, will serve to support students following in her considerable footsteps.

"I believe that leaders should lead by example," said Thompson, who chairs the School of Social Work's Board of Visitors. "And I don't think any student who has the will and desire to serve as a social worker should be denied that opportunity because of a lack of money."

Thompson's own path to service in social work began in 1970, shortly after she moved from her hometown of St. Louis to Detroit. She quickly landed a job as a secretary with the Model Neighborhood initiative, part of the federal War on Poverty program. Witnessing the program's positive impact on residents of targeted Detroit neighborhoods inspired Thompson to pursue a career in a helping profession. "I knew then that working with people, helping them to make changes in their lives and their communities, was what I needed to be doing," she said.

Thompson majored in mental health at Wayne County Community College, transferred to Wayne State University in 1978, and completed her bachelor's in social work in 1980. She paid for tuition and books with wages she earned working as a cashier in her uncle's grocery and clothing stores, where she was able to arrange her hours around her class schedule.

An earnest student, Thompson was active in several campus groups at Wayne State, including the Detroit chapter of the National Association of Black Social Workers, for which she later served as President and member of the national steering committee. She recalls a strong camaraderie among the students and an actively engaged faculty. Thompson calls School of Social Work professor (later dean) Phyllis Vroom her shero, saying, "Phyllis Vroom taught us that being a social worker was really about service and caring for those who were vulnerable, as well as embracing the knowledge, skills and values of the profession."

While still completing her master's in social work in 1981, Thompson was invited to become the first African American woman to manage Boysville of Michigan, a home for delinquent boys. She worked at Boysville until the late '80s, when she was recruited as deputy director of Diversified Youth Services. Thompson worked for Diversified through the mid-'90s, concurrently serving as an adjunct professor of social work at Wayne State.

Black Family Development, Inc., a nonprofit social service agency, asked Thompson to serve as its CEO in 1994. When she assumed leadership, BFDI had an annual operating budget of approximately $1.2 million. Thompson credits the School of Social Work with teaching her the grant writing, budgeting and personnel management skills she employed to grow BFDI's annual budget to $18 million by 2001 and $29 million by 2007.

Because BFDI's budget represents the agency's capacity to provide comprehensive social services to the children and families of Detroit and Wayne County, Thompson's proudest achievement is its growth.

In recognition of her accomplishments at BFDI and elsewhere, her service to Wayne State, and her many contributions to the community, Thompson was invited to sit on the Board of Visitors shortly after it was first convened at the School of Social Work in 2001. She was named board chair in 2014. "I love serving on the Board of Visitors," she said. "I love being engaged, being connected to the school, knowing how we're progressing as a profession, and I really love the people."

Actively supporting the School of Social Work is only part of Thompson's motivation for serving on the board and creating an endowed scholarship. "I was well supported when I was a student, and now that I have the means to provide support to others, I should," she said.

Thompson's advice to recipients of her scholarship and all young social workers is to "always give back, and keep service to others front and center." With her endowed gift, Thompson ensures her legacy of service will continue to advance and inspire social workers well into the future.