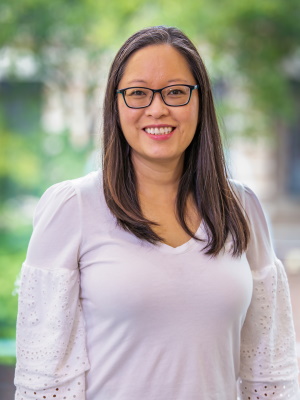 Luisa Kcomt is an Assistant Professor at WSU’s School of Social Work. She received her Ph.D. from the University of Windsor in 2019. Following her doctoral studies, she was a post-doctoral research fellow at the University of Michigan’s Center for the Study of Drugs, Alcohol, Smoking and Health under the mentorship of Sean Esteban McCabe and Carol J. Boyd.

Kcomt has worked as a social worker in various clinical settings including hospital, outpatient behavioral health, and hospice and palliative care. Her research agenda is motivated by over 20 years of clinical and leadership experience, and centers on substance use, health disparities, and healthcare access among sexual, gender, and racial/ethnic minority populations. Using a social justice lens, her goal is to advance health equity and promote the health and well-being of vulnerable populations. Kcomt’s research has been published in the American Journal of Preventive Medicine, Drug and Alcohol Dependence, Journal of Social Work in End-of-Life and Palliative Care, and others.

Kcomt is an Asian American woman and a first-generation college graduate. She has lived in four countries (Peru, Commonwealth of the Bahamas, Canada, and the United States) across two continents to date. Her lived experience as an immigrant has fostered a social consciousness and empathy for marginalized and vulnerable populations. She is a Licensed Master of Social Work in the state of Michigan.

In her free time, Luisa enjoys tending to her potager garden to promote beauty, sustainability, and biodiversity. She also enjoys the culinary arts and watching period dramas.

Tobacco use is the leading cause of preventable morbidity and mortality worldwide. Evidence suggests that the prevalence of tobacco use is higher among transgender populations (individuals whose gender identity differs from their assigned sex at birth) relative to cisgender populations, placing them at greater risk for smoking-related health consequences. Environmental stressors and targeted marketing efforts by the tobacco industry contribute to transgender individuals’ higher risk of tobacco use. Most research on tobacco use among transgender populations comes from cross-sectional studies. There remains limited knowledge about gender-fluid individuals (i.e., persons who experience changes in gender identity over time) because of conventional binary conceptualizations of gender and the inability of cross-sectional studies to assess gender fluidity. The aim of this project is to examine potential differences between gender-fluid versus gender-stable individuals in their tobacco use and assess factors influencing their trajectories of tobacco use over time using nationally representative longitudinal data.
Funding Support: National Cancer Institute of the National Institutes of Health and U.S. Food and Drug Administration Center for Tobacco Products (U54CA229974).

National surveys often produce disparate estimates of gender identity, sexual orientation, and common substance use behaviors even when they are conducted in the same year. Research has shown that the location of survey administration or the mode of survey delivery may affect respondents’ answers, thus accounting for some of the differences in survey estimates. However, it is difficult to determine from the survey (or data) itself how the wording of these questions may influence estimates and how respondents may interpret these questions. There is a need to assess potential differences in the wording of survey items within population-based studies to determine if this may bias estimates measuring hard-to-reach populations (i.e., sexual and gender minority individuals) and key health behaviors (e.g., nicotine/tobacco product use). This project will assess differences in the wording of survey items assessing gender identity, sexual orientation, and nicotine/tobacco product use across three national studies (i.e., the 2015 U.S. Transgender Survey, the Behavioral Risk Factor Surveillance System, and the Population Assessment of Tobacco and Health) to determine if a diverse group of respondents will interpret and answer these questions in a similar or dissimilar manner.
Funding Support: Population Dynamics and Health Program, Institute for Social Research, University of Michigan

Kcomt’s work is focused on closing the health gap for vulnerable populations. She has educated healthcare providers on eliminating barriers to healthcare access and promoting an inclusive environment for sexual and gender minority (SGM) people. Her research has underscored the importance of considering discrimination as a factor influencing substance use among SGM populations. Currently, she is collaborating with colleagues at the University of Michigan to study nicotine/tobacco use among SGM people. By identifying subgroups at greater risk for nicotine/tobacco use and risk/protective factors, this work will be used to inform prevention and intervention strategies.

Kcomt has also promoted healthy development for youth, particularly through her previous work in establishing a national network of children’s bereavement camps. These camps provided bereavement support to children, adolescents, and their parents/guardians who experienced the death of a significant person in their lives. Importantly, the opioid epidemic has resulted in loss for many families through drug overdose. Combining her clinical experience with grief and loss, and research on substance use, she is committed to creating innovative ways to support children and youth who have experienced loss through drug overdose in their families.