Ida Rosenbaum Kost was born in 1917 to Yiddish-speaking immigrants from Eastern Europe. Her daughter, D’vorah Kost, describes her mother as “liberal, open-minded, understanding, and dedicated.” Kost earned a bachelor’s from Wayne State University (WSU) and a Masters in Social Work from the University of Michigan. She worked for Detroit’s Aid to Families with Dependent Children (AFDC) and became a family therapist and supervisor for Jewish Family and Children’s Services. She was active with the National Association of Social Workers, traveling with them to China and the Soviet Union in the sixties and seventies. Although she retired in 1977, she continued to help others by starting a support group at a senior living community in Florida, and another for the hearing-impaired, as she, too, suffered from that limitation.

D'vorah’s father, David Kost, was a hard-working dentist in Detroit. Having grown up as a poor immigrant and living through the Depression, he saved for the future. He died at the age of 98 in 2010, and in 2013, Ida Kost died at 96, leaving D’vorah with more money than she needed for herself and her family.

Her father left $10,000 to his dental fraternity, to fund low-income dental clinics, for which D’vorah established an annual fund.

“When my mother died, I wanted to give annually in her name as well. Her identity as a social worker was paramount in her life, so to honor her memory I chose to give WSU, her alma mater, an ongoing grant for scholarships to the Wayne State School of Social Work,” she said.

Established in 2018, the Ida Rosenbaum Kost Endowed Scholarship was created to support undergraduate or graduate students who have faced significant challenges in their lives. Preference is given to students in good academic standing who are involved in the Transition to Independence Program (now called CHAMPS, “Champions Aspiring to Make Pathways to Success) for WSU students aging out of foster care, those facing housing or food insecurities and those who have been through the criminal justice system.

I try to make reparations where I can, which is why I specifically designated that the grantees of this scholarship be those who have endured hardships, discrimination, and have the strength to not only survive, but to thrive. - D’vorah Kost

“I cannot personally eradicate economic injustice, systemic racism, able-ism, and violence, but I can do my part to help individuals on their journey, gratified in knowing they will also be helping people by serving as social workers.” A social worker herself, just like her mother, she too didn’t stop in retirement, but rather fulfilled a long-time goal to do service travel. The plight of refugees captured her heart.

In 2014, six months after Ida’s death, she felt a calling to join a medical/humanitarian mission serving Syrian refugees in Jordan.

In 2015 and 2016 she visited Gaza with medical delegations, and in 2017, she helped Syrian refugees in Greece. On these brief missions she offered creative play to children and trauma management tools such as Reiki, Emotional Freedom Technique (EFT/the ‘Tapping Solution’), yoga, and breathing techniques to women.

When Russia invaded Ukraine in February 2022, she again felt compelled to do something. From mid-April to mid-May she stayed with friends in Krakow, Poland, and found many opportunities to help Ukrainian refugees, in shelters and at the World Central Kitchen.

“I collected $4,000 from my communities to purchase and distribute needed supplies and cash,” she said. 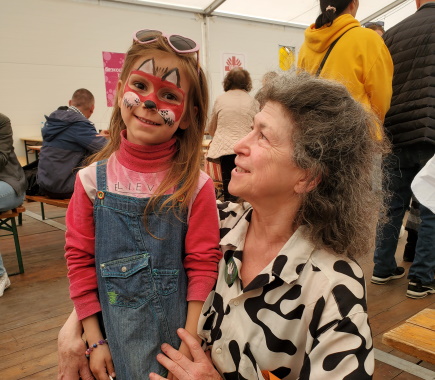 “Art, music, dance, clowning, and play don’t require words…thus language was not a big problem. Yoga and hands-on healing like Reiki also are non-verbal. My work there felt very purposeful, and seeing children and adults smile at my antics and joyously receive the gifts I brought was enormously gratifying. I realized the impact was tiny while the trauma was vast.”

Kost said her greatest accomplishment there was facilitating stable housing for a three-generational Ukrainian family into the summer home of her Polish friends.

She’s hoping to do a service trip to both Gaza and Kiev in March and April.

The School of Social Work supports international research and study abroad opportunities for faculty and students through the work of the recently established Global Committee. Led by Associate Professor Jun Sung Hong, the Committee collaborates with global partners in research projects and provides students with an opportunity to develop a deeper understanding of both areas and global issues that are relevant to social work.

Ida and David Kost instilled in their daughter the importance of helping others, thus helping society as a whole.

“May we all contribute to justice and peace, equity, sustainability, and treat all humans and living things with respect. I hope this scholarship provides support to a social work student who takes this statement seriously and personally. It is my pleasure to pay it forward.”

Your gift makes a difference for our students, faculty and community. To learn more about making a gift to the School of Social work visit our giving page or contact our Individual Giving Officer Theresa Port at hm8006@wayne.edu or 313-577-4429.