At the Wayne State University School of Social Work Open House last month, a courtyard was dedicated in honor of late Detroit City Council member and changemaker Maryann Mahaffey. It was a fitting tribute that part of the School’s grounds, the very place she walked for more than 20 years as a Social Work professor, would be named for a woman who had such a significant impact on Detroit and the social work profession. 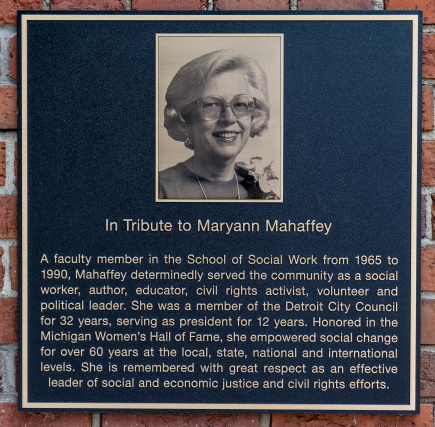 “Maryann put into action her deep commitment to solving critical social issues. As a beloved member of the Detroit City Council for over 30 years, including 12 as City Council President, she was also an author, civil rights activist, volunteer, and political leader. However, there is no street, park, building, garden, or statue commemorating her legacy. Before our collective memories fade, we would like to ensure that generations will know about her fierce dedication to helping Detroiters, as well as her commitment to social work education,” said Sheryl Kubiak, dean of the School of Social Work.

From now on, anyone visiting the School can stop by the Mahaffey Memorial Garden at 5447 Woodward Avenue to reflect on and remember this trailblazer and social activist.

Mahaffey died in 2006 at the age of 81, but her legend lives on. To continue her tradition of giving, the School established the Maryann Mahaffey Legacy Fund. Gifts to this fund will be used for initiatives and events that support the elimination of poverty and housing insecurities, the advancement of disability justice, and other causes that Maryann championed.

Mahaffey served as a voice for the underrepresented and was a champion for women’s rights. She filed a precedent-setting lawsuit which established a women’s right to run for office using her birth name instead of their husband’s surname and led the fight to open the doors of the Detroit Athletic Club to women. She also sponsored an ordinance explaining and prohibiting sexual harassment of city employees. A gay rights activist before her time, she supported same sex partner health benefits and strongly opposed the anti-marriage Proposal 2.

“As far as I’m concerned, people have a right to formalize their relationships. I’ve known families who have been together for 53 years and they’re gay,” said Mahaffey. 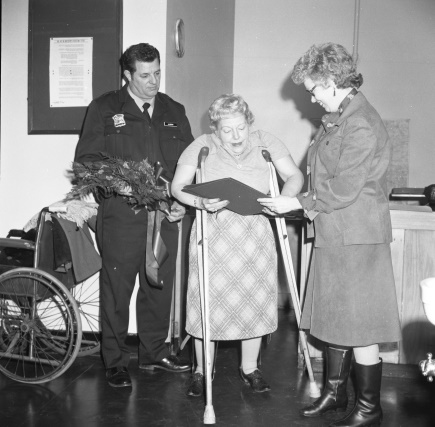 She also taught and mentored hundreds of students and rising stars, including the late City Council Member and President, Erma Henderson. Mahaffey was the first woman elected President of the National Association of Social Workers and was a member of the executive committee of the International Federation of Social Work. She was inducted into the Michigan Women’s Hall of Fame in 1997.

“Maryann stood up for the rights of the most vulnerable citizens to have access to housing, food, economic and social justice, which is why we honored her legacy by dedicating the Mahaffey Memorial Garden at the School of Social Work,” said Kubiak.

Mahaffey, who created the first-ever Disabilities Task Force, led by persons with disabilities, would be pleased to know that the new courtyard was designed to be accessible to all. It features furniture which allows for easy access to those in a wheelchair.

My mother fought together with disability community members to better the lives of people with disabilities. She could never abide discrimination based on race, ethnicity, class, gender, or disability. She knew that disparate treatment by government, and disparities based on disability in poverty, education, employment, housing, transportation, and health care must be eradicated. - Susan Dooha, Mahaffey's daughter

The dedication was well-attended by past and current students, faculty members, friends, family members, and other guests.

“Attending the Maryann Mahaffey Courtyard Dedication, and seeing students, faculty and alumni sharing a commitment to the work of Ms. Mahaffey, reaffirmed my dedication and purpose to the field of social work,” said Susan Rogers, former Social Work adjunct professor and director of Parare Counseling and Consulting in Farmington Hills.

Those interested in ensuring Mahaffey's memory and impact are honored are encouraged to make a gift via the Maryann Mahaffey Legacy Fund WarriorFunder page. Individuals may also contact the School’s Individual Giving Officer, Theresa Port, at theresa.port@wayne.edu or 313-577-4429 to learn more.