It is no secret that the social work field is overwhelmingly white and female dominated. But how do we expand the diversity of social work professionals, particularly Black and Latinx males? With the support of the Wayne State University (WSU) Academic Leadership Academy, Academic Advisors Geoffrey R. Jones, LLMSW and Lawrence Robinson, LMSW are seeking to expand the diversity of students in the School of Social Work and provide a roadmap for schools across the nation seeking to do the same.

Funded by the WSU Office of the Provost, the Academic Leadership Academy (ALA) program is designed for full-time faculty and academic staff with knowledge and experience working towards the advancement of the WSU mission and their area of expertise. ALA fellows strive to expand their effective leadership capacity at WSU, in their disciplines, and/or communities, via formal and informal leadership roles. Throughout the one-year program, ALA fellows participate in monthly seminars, mentorship meetings, a one-day leadership retreat and complete a leadership project of their choice.

Rooted in advancing the mission of the School to “create and advance social work knowledge and prepare a diverse student body for social work practice that promotes social justice, with a particular focus on urban communities”, Jones and Robinson’s leadership project will address multiple hurdles facing the profession and community.

“Due to the COVID-19 pandemic, racial tensions, and political confusion, mental and physical health concerns have significantly increased, especially within urban communities such as Detroit,” noted Robinson. “As a result, the social work profession is in high demand in the spaces of mental and community health and political leadership.”

According to the Bureau of Labor Statistics (2022), the field of social work is projected to grow an additional 12 percent between 2020 – 2030. This equates to an average of 78,300 new jobs each year to be filled. “This is a massive opportunity for the School of Social Work to identify and address the barriers and negative stereotypes that deter Black and Latino males from entering and promoting the social work profession,” stated Jones. 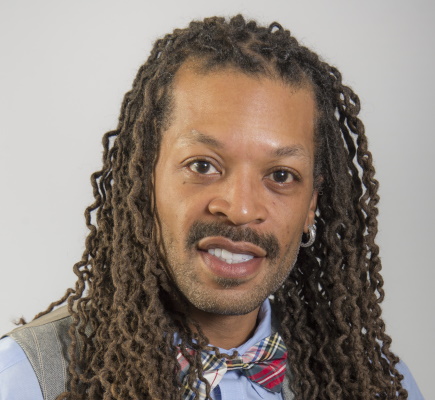 For both Jones and Robinson, the road to Detroit’s Social Work School and a helping profession was filled with obstacles and opportunities. “I am the product of a single parent household, the Detroit Public School system, and grew up on the east side of Detroit. With odds stacked against me as a young Black male, I worked hard to not become a statistic and attended a prestigious Historically Black College/University, Tuskegee University,” stated Jones.

The first in his family, Jones graduated with his bachelor of science in psychology from Tuskegee University in 1996 and went on to earn a master of social work from California State University, Dominguez Hills with an emphasis on children, youth and families. After joining WSU in 2015 and transitioning to the School of Social Work in 2018 as an Academic Services Officer II, Jones earned a certificate in alcohol and drug abuse studies and a certificate in gerontology.

This project resonates with me not only on a professional level, but also a personal one as well. After graduating I knew I had to help my people, especially Black males, because we are always labeled with negative stereotypes and I as a Black man do not fit the script. I received encouragement and support from my Tuskegee family during my educational journey and want to provide that to other overlooked Black males. – Geoffrey Jones, LLMSW

Robinson also understands the hurdles facing a first-generation college student, having been the first in his family to earn a bachelor’s degree. Born and raised in the city of Saginaw, Michigan and a proud product of the Saginaw Public School system, Robinson’s life was filled with distractions that had the potential to send him down the wrong path.

Inspired by all helping professionals, especially the males who worked to serve his community and were instrumental in revealing alternative paths of achievement, Robinson sought to use his sphere of influence and expand his leadership skills as role model for men of color.

I remember the male mentors and figures who influenced my life because of their ability to relate to race, gender identity, and cultural interests. There was no secret these types of positive role models were a rare and valuable force. – Lawrence Robinson, LMSW

A Warrior through and through, Robinson earned a bachelor of psychology and a master of social work from WSU. He focused his graduate studies on macro social work practice while working professionally to promote educational achievement and workforce development for underrepresented populations. Robinson has partnered with others to develop, implement, and evaluate student support programs and services for organizations such as the WSU Office of Federal TRIO, and the City of Detroit Mayor’s Office. In 2018 Robinson launched the Detroit-E3 (Exposure, Engagement, Empowerment) social change venture, which bridges gaps between education and industry. In addition, Robinson is a Licensed Master Social Worker, and serves the few black male therapist in the Detroit area.

Housed in Michigan’s most diverse university, the School of Social Work has worked to support the unique needs of its diverse student population which comprises nearly 45% of the entire study body. This project will not only expand the School’s existing efforts to attract minority males, but will also develop specialized supports for their educational journey. Through the identification of primary barriers that deter minority males from pursuing the social work profession, Jones and Robinson will develop resources and support service partnerships within the WSU campus community and Detroit area partners.

I know with our diverse backgrounds, knowledge of, and passion for this population, we will make a positive difference in our institution and community moving forward with greater diversity, equity, and inclusion. This project can not only change lives, but the landscape of the social work profession as well. – Geoffrey Jones, LLMSW